When news that Martin Luther King Jr. had been assassinated came over the radio, C.P. Ellis threw a party. As president of the Durham, N.C., chapter of the Ku Klux Klan, Ellis opposed everything that King stood for.

I’ve been thinking a lot about Ellis’ story as I read the things being said about Donald Trump’s supporters. They’ve been called “hideous disgusting racists” and “bigots.” I feel the pull of such condemnatory language. Trump has said a lot of outrageously racist and xenophobic things, and some of his supporters have acted hatefully and violently toward protesters.

But to typecast all Trump’s supporters as racists and bigots is not only wrong, but obscures the fact that many of them are good people at heart. People like C.P. Ellis.

Ellis was poor, white and uneducated. Growing up, he was ridiculed by other kids because his family couldn’t afford nice clothes. His father died when Ellis was 17. Ellis dropped out of school to work so he could support his mother and sister.

He married and had children — one was born with visual and cognitive impairments that required expensive special care. Ellis worked all the overtime he could get, yet he was constantly financially strained. No matter what he did, he just couldn’t seem to get ahead.

Ellis was frustrated. He felt marginalized in a society where he felt he could never amount to anything. Then he found the Klan.

In an interview (pdf) with Studs Terkel, Ellis described the night he became a Klansman.

The Klan made Ellis feel like he belonged. It gave him a voice.

Fast-forward to 2016 and the accounts of why some people support Trump sound a lot like Ellis’s account of why he joined the Klan. In their excellent analysis, The Geography of Trumpism, Neil Irwin and Josh Katz found that support for Trump is strongest in counties with low high-school graduation rates where people work blue-collar jobs and live in mobile homes. And more than supporters of any other candidate, Trump’s backers feel marginalized and excluded. They feel like Trump has given them a voice they didn’t have before.

Of course not all Trump supporters fit this mold. There is considerable variation among them and in their attitudes toward Trump’s most racist and xenophobic remarks. My point is just that many of them are people like C.P. Ellis: honest, hardworking and well-intentioned.

And like C.P. Ellis, they can be won over. But condemning them and trying to exclude them from the political process is unlikely to change their minds.

Being condemned as a bigot and a racist didn’t change the mind of C.P. Ellis. When people ridiculed him for being a Klansman, he simply felt even more excluded from mainstream society, and even more at home in the Klan.

What changed Ellis’ mind was feeling included. He quit the Klan when he was able to feel part of something that included both blacks and whites.

In 1971, Ellis was asked to attend a series of committee meetings on school desegregation. He attended the first one reluctantly. He ranted about how blacks were the source of all the trouble and how much better things would be if the schools remained segregated.

When Ellis finished his rant, Howard Clements, who is black, stood up and thanked Ellis for attending and speaking his mind. “I’m certainly glad C.P. Ellis came, because he’s the most honest man in the room here tonight,” he said.

At the end of the meeting several black activists offered to shake his hand. It was an astounding gesture. Ellis hated them — he opposed everything they were fighting so hard for — yet they tried to make him feel welcome.

At the next meeting the time came to elect two co-chairs for the committee. Joe Becton, a black man and the executive director of the Human Rights Commission, nominated Ellis. This was another remarkable gesture of inclusion — a civil rights activist nominating the president of the local Ku Klux Klan to be co-chair of a committee on desegregation.

Ellis reluctantly accepted the position. The other co-chair would be Ann Atwater, a black activist who had once pulled a knife on Ellis after he made some particularly incendiary remarks. Ellis and Atwater hated each other, but they committed to at least trying to work together.

Over the course of the meetings that followed, Ellis began to learn about the people he had fought against for so long. At one session a black parent recounted the way her child was discriminated against at school. The teachers all assumed the kid was a troublemaker because he was poor and black. Ellis was struck — his sons were also picked out as troublemakers because they were poor.

Later that day Ellis asked Atwater, “How’s your kids?” This question led to perhaps the most important moment in the story of C.P. Ellis. Atwater said her daughter was being made fun of at school. Ellis shared that his son was, too. Soon they were sharing their experiences growing up poor and the struggles they faced raising their own children without money.

Ellis suddenly realized that Atwater was, in so many ways, just like him. The moment is described beautifully in Osha Gray Davidson’s telling of the story:

He looked at her, and it was as if he was seeing her for the first time. He was stunned by what he saw. Mirrored in her face were the same deeply etched lines of work and worry that marked his own face. And suddenly he was crying.

Ellis didn’t quit the Klan that day, but that moment put him on the path. It was a moment that was only possible because of the courageous gestures of inclusion leading up to it.

Another such gesture came shortly after, during a public session where Ellis had erected a large display of Klan materials — photographs of burning crosses, Nazi armbands and a large collection of white supremacist literature. Some black students wanted to tear down the display.

Ellis went to Atwater. He told her of the black students’ intentions and said, “Either you do something, or I’m going to get my gun and protect my things.”

Atwater’s reaction is documented in one of the most striking passages of Davidson’s book:

Ann planted her large frame in the doorway and lit into the youths. “If you want to know where a person is coming from,” she yelled, “you need to read this material, not tear it up! You got to see what makes him think what he thinks!”

These lines have resonated with me as I read accounts of Trump’s rallies being shut down by protestors and displays being dismantled.

On the one hand, Trump is a demagogue who uses his rallies to stoke racism and xenophobia. Protesting Trump and tearing down displays that instill legitimate fear seems entirely appropriate.

On the other hand, I worry that attempts to shut down Trump and his supporters are likely to deepen the sense of marginalization many of his backers already feel. And the more marginalized they feel, the more fervently they will support their demagogic leader.

But what can be done? How can we stand vehemently against Trump’s message of racism and xenophobia, while at the same time making his supporters feel like they have a voice? How do we encourage moments like the one between Ellis and Atwater?

I don’t have answers to these questions, but I think they are the questions we need to be asking. Condemning Trump and his supporters only gets us so far. We need to work to win over their hearts and minds and we can’t do that work from a distance.

Aaron Ancell, from Vancouver, Canada, is a Ph.D. student in philosophy at Duke. 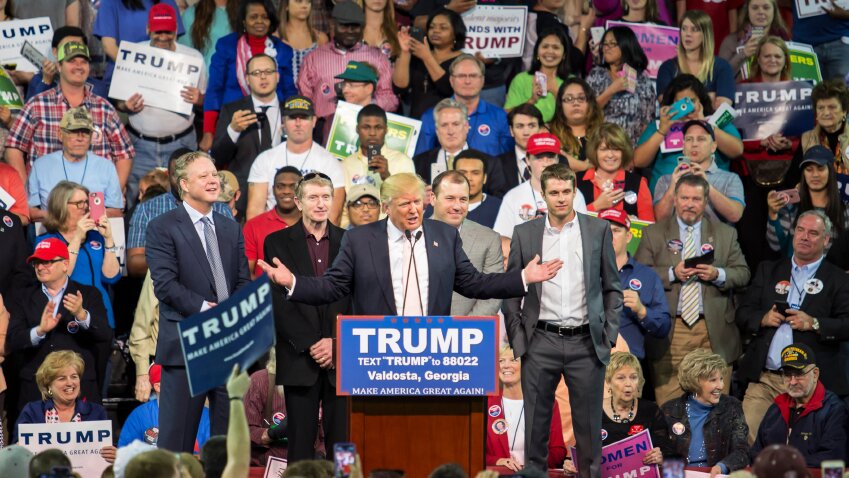