I’m Mexicana-Colombiana. Part of my family practices Islam and another part is undocumented. We are Donald Trump’s worst nightmare, yet he’s making my dream come true.

Last summer the world heard Trump call us rapists, traffickers and murderers, adding that he assumed some of us were “good people.” As my eyes and mouth opened wide in shock, I never thought I would feel the power of the Latino response that was to come.

I was so glad that almost instantly, Univison, my favorite Latino television channel, canceled its contract with the Trump organization and his Miss Universe pageant. My family quickly made sure we were eligible to vote so we could support whoever would oppose Trump.

Recently, a TIME Magazine poll found that Latinos are enthusiastic as ever to register to vote. The State Department could vouch for this enthusiasm as it saw an increase in naturalization applications from Latino permanent residents eager to raise their voice in this election. It is estimated that 28.5 million Latinos are going to the polls this year. That’s more than ever recorded in U.S. history.

Donald Trump is good for Latino politics because by addressing Mexican migrants, one of our most marginalized and silenced Latino communities, Latinos across nationalities, color and legal status came together to protest his bigotry. Trump’s hate speech woke up millions of sleeping Latinos in the U.S. who previously were socially and politically asleep — indifferent, dispassionate and parochial.

Most Latinos, like my family and I, do not know or remember much about our history of political and social activism. We recognize names such as Cesar Chaves, Dolores Huerta and the Dreamers, but their work seems distant in time and location.

Our wide diversity has also been a dividing factor. Latinos include people from more than 25 countries and independent territories. While identifying as “Latino” unites us, our nationalism has made it difficult for us to stand up against injustice.

In this election, being Latino doesn’t automatically make you an advocate for Latino issues. Many of us share enough European heritage or come from a high socioeconomic status that allow us to blend into whiteness. Others remain indifferent to the national hate speech toward Latinos. Whatever the case may be, Trump has stirred enough commotion for the country to notice.

As a creative, multi-talented people, we come up with different ways to show solidarity with one another. Emilio Estefan, a Cuban-American producer who has 19 Grammy Awards to his credit, created a music video called “We’re all Mexican” to raise awareness that Mexicans make up the majority of Latinos living in the U.S. Dozens of well-known Latinos from all backgrounds, including Frida Kahlo, Alejandro Gonzalez-Inarritu, Pope Francis and Pitbull, appear in the music video.

A Latino-run non-profit called Turn Ignorance Around aired a commercial where Latinos admitted they were traffickers, murderers and dealers. When they turned around they revealed they trafficked stories by being directors, they killed boredom by being comedians, and they dealt flavor by being chefs. The campaign showed Latinos hold a variety of jobs and hobbies in the U.S. What the commercial mostly did was point out that Trump’s comments were based on ignorance.

My family is a mixed-status family like many others, where some of us have citizenship and others are undocumented. Trump’s hate rhetoric has served as a catalyst for my family to mobilize the paperwork for legalization. For the first time, my mom is encouraging our family and our friends to vote. She says, “Vayan a votar, tenemos ese privilegio” (Go to vote, we have the privilege).

My mostly black and brown community is also registering more people to vote. We are setting our pettiness and indifference aside to work with each other on these issues. We are waking up.

So, if you’re reading this Mr. Trump, thank you. 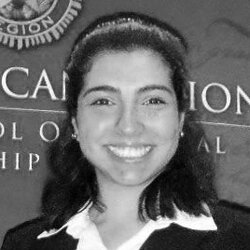