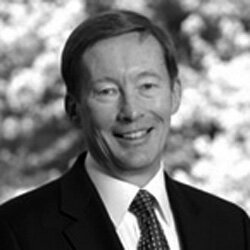 Professor of the practice of law; executive director of the Center on Law, Ethics and National Security.

He specializes in national security, international law, civil-military relations, cyberwar, airpower, counter-insurgency, military justice, and ethical issues related to the practice of national security law. Dunlap is a former deputy judge advocate general of the U.S. Air Force who retired from the military in 2010 as a major general.

How Trump must now shift from candidate to commander-in-chief

The perfect book for your next plane ride

A film every American must see

Politics and the Military

With both major party candidates scheduled to address a veterans association this evening, Duke professors Charlie Dunlap and Peter Feaver weigh in on whether military endorsements are worth as much as the candidates think.

Why declarations of war matter

"I have long believed that it is a melancholy but inescapable truth that in too many instances it takes litigation to get powerful corporate interests to do what they ought to do in the public interest. These days I think that there are instances where civil or criminal legal action against social media companies whose platforms are being used by terrorists could provide a needed incentive.”

Charles Dunlap on the NATO treaty

Why didn’t Dallas police use nonlethals?

Facts about the defense budget you should know

Brexit and national security? Keep calm and carry on

Charles Dunlap on the use of drones

Killer robots are what some are calling a class of weapons that do not yet exist, but could one day soon. Some argue that these weapons could target more precisely, and preserve the lives of human soldiers. National security expert Charlie Dunlap joins a discussion of whether these powerful weapons are key to more humane warfare or should be banned before it’s too late.

The Year of the Disaffected Voter

At both ends of the political spectrum, Donald Trump and Bernie Sanders are attracting millions of voters who feel excluded from the political process. Such large numbers of disaffected voters are a bad sign not just for the major parties, but for the state of our democracy, says Charlie Dunlap, retired U.S. Air Force Major General and a professor of the practice at Duke Law School.

Is the U.S. military strategy doing more harm or good in the Middle East?

America and the Syrian refugee crisis

The next big thing in interrogation

Is it always illegal and against our values to ‘tidal wave’ or ‘carpet’ bomb? Not necessarily

Why can’t the media be more transparent about drones?

Have presidents ever given the military illegal orders? Yes

Can Hillary’s email troubles stop her from becoming president?

Register women for the draft? Not so fast

As the Paris attacks tragically illustrate, we already live in a world where the worst of humankind exhibit a stunning contempt for the law.

ISIS vs. the cult of air power

Charlie Dunlap on ISIS and the First Amendment

How the U.S. should respond to ISIS

In the first installment of "Office Hours," law professor and national security expert Charles Dunlap Jr. is interviewed by Duke freshman Ethan Miller about what actions the U.S. should take against ISIS.

Are air strikes the most effective way of defeating Islamic State?

Law professor Charles Dunlap emphasizes, “before we put another young American in harm's way on the ground, we ought to subject ISIS to the full might of U.S. and allied air power."