Is Ben Carson the smartest candidate just because he’s a surgeon?

Anti-politician candidates are extremely adept at using their careers outside politics to establish credibility with voters. Carly Fiorina showed us her extensive history as the CEO of Hewlett Packard, and then asked us to trust her ability to manage the world’s largest bureaucracy. Donald Trump pointed to the immense wealth he created in real estate, and then used that as proof he could strike favorable trade deals and stand up to other world leaders on a global stage. And Ben Carson cultivated the image that he’s a thoughtful, pensive genius, and used his reputable career as a neurosurgeon to bolster his assertion.

In many ways, Carson is the measured and quiet alternative to the ‘shock and awe’ persona that Trump embodies; he is perceived as more mature and mentally superior. And that is why Carson’s favorability with GOP voters is grounded in the idea that he’s the most intelligent guy in the room. If he’s a world-famous neurosurgeon, how could his policy ideas not be fundamentally comprehensive and well thought out?

In reality, many of Carson’s positions on issues don’t make a lot of sense. The fact that he’s a doctor doesn’t mean that he knows the first thing about economics, domestic civil issues, or foreign policy. For example, his 10-15 percent flat tax plan — which sounds good in theory — has been debunked by economists and tax code think tanks. Even if he were to close exemptions and loopholes, it would only bring in 32 percent of current tax revenue and would only fund 28 percent of annual government spending. This would require cutting Medicaid, Medicare and other large government entities in order to balance the budget. This isn’t a conservative policy, it’s ignoring basic math.

When asked about guns in the aftermath of the Oregon shooting, Carson responded, “I wouldn’t just stand there and let him shoot me” and suggested victims of gun violence should fight back against their attackers.

Even on subjects like global climate change, evolution and homosexuality, where we’d expect him to be aware of the facts and evidence laid out by the scientific and medical communities, he has proudly fought against consensus. He argued that prison rape culture is evidence that being gay is a choice, refuted the theory of evolution and the Big Bang on several occasions, and doubts that climate change is man-made. One would think a doctor would pay attention to the findings and consensus of his colleagues in the medical field.

It seems that GOP voters truly believe in the ethos that the Carson campaign has manufactured: our candidate is smart and therefore his policy ideas are, too. His body language, the way he speaks and his resume are all strategically planned to establish unwavering credibility.

However, some of these people have gotten swept up in this image of pensiveness and thoughtfulness to the degree they don’t notice that, in many cases, this neurosurgeon doesn’t know the first thing about public policy. The intelligence required to be a successful doctor doesn’t necessarily transfer over to other fields, particularly if you don’t do the homework necessary to be informed.

It’s disappointing to see that voters assume he’s the smartest candidate just because he was a surgeon. I’d prefer that we ask him to prove it.

Nicolas Justice, from Healdsburg, California, is a Duke sophomore studying economics and public policy. He’s also the chair of the Burke & Paine Committee for Duke Political Union, informing the electorate one rant at a time. 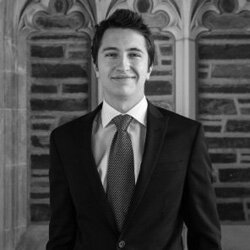